This is a guest post by Fran Hughes and Ben Martineau, directors of a performance of the academic play Blame Not Our Author at the University of Cambridge in January 2017. The Society would like to thank Fran and Ben for writing for us, and for bringing our edition to life in performance.

A Cambridge Student Production of Blame Not Our Author

This January marked the first re-performance in around four hundred years of ‘Blame Not Our Author,’ written circa 1630 for students in the Venerable English College in Rome. The play is set in a Euclidean world, populated by shapes and ruled over by Regulus, the Ruler.  A melancholic young square named Quadro dreams of becoming the perfect circle, whilst his dastardly friend, Rectangulum, decides to seek revenge on the entire shape-world, turning Quadro, Line and Circulus against their weary creator, the Compass. Geometric chaos ensues, as the characters in an overused textbook are finally given the chance to rebel against their lot in life.

Transcribed and published by the Malone Society in 1983, Blame Not Our Author has not knowingly been performed since it was penned in the English Jesuit College (now the Venerable English College) in Rome circa 1630.  Written for students some 400 years ago, it is packed with visual gags that are farcical, witty, and still eloquent to anyone familiar with school geometry lessons. On another level, it provides a rich insight into a world where publications on practical mathematics, geometry, and technical skills were proliferating in print culture, and reflects certain historical anxieties about the public use and abuse of mechanical knowledge. 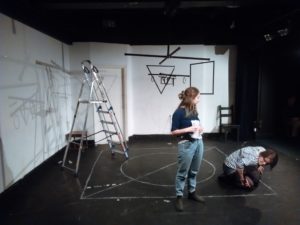 Quadro and Rectangulum in Blame Not Our Author,
directed by Fran Hughes and Ben Martineau,
University of Cambridge,
January 2017.
Image Credit: Fran Hughes.

The focus of the play reflects the heavy emphasis on geometrical learning in the Jesuit-influenced curriculum at the college.  Alongside the classroom jokes, however, are darker references to the religious conflicts of the time.  When Quadro is bound in a circular contraption named the ‘Squarenigher’s Daughter’, the author was directly alluding to the torture instrument known as the ‘Scavenger’s Daughter’, said to have been used on Catholics during the Reformation.  Moreover, when the character of Line taunts the fact that ‘Bible the Minister’ has had her translate the Psalms ‘into better lines’, the author was mocking the verse of the Protestant Sternhold and Hopkins Psalter, written in ballad metre.  Despite these poignant historic references, the play is a comedy, and was probably performed for the annual Shrovetide festivities before the beginning of Lent. 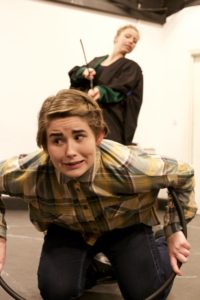 Working with the Malone Society’s thorough transcription of the original manuscript and adapting it for re-performance allowed for an extremely dynamic relationship with the script.  As directors, the excitement of working with a neglected and relatively unknown play allowed for a degree of creativity not usually afforded to well known early modern plays, where audience members often arrive with many preconceptions about the text.  Rehearsing revealed many more hidden jokes and farcical elements within the play.  Rather than going for a strictly historical reconstruction, the actors wore contemporary dress with subtle allusions to their ‘shapes’, such as a chequed shirt for Quadro, and a walking-stick-come-compass for the elderly, academically-dressed Compass.  The black-and-white theme of the set evoked the palette of printed textbooks, whilst a planetarium-like mobile at the centre with suspended shapes allowed characters to enact some of the more abstract jokes, and also alluded to their shared desire to become heavenly, Platonic forms. 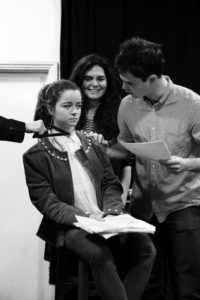 The introductory notes provided in the Malone publication sparked lots of discussions during the rehearsals.  Knowing that different hands feature in the original manuscript helped to create a real sense that we were reviving a collaborative, historic, student project, and all members of the cast and crew were keen to pitch in with various interpretations.  The current custodian of the manuscript in the archives in Rome was in attendance, and we have had multiple expressions of interest concerning where the script can be read – it is thanks to the Malone Society that this project was even possible, and we are extremely thankful for the existence of their publication!