The Malone Society is delighted to announce the publication of its 2019 volume, an edition of Marlowe’s Doctor Faustus 1616 by Professor Chiaki Hanabusa of Keio University, Tokyo. Like its companion volume, Doctor Faustus 1604 (2018), this is a full-colour 1:1 reproduction of the base text, the only surviving copy of Q4 in the British Library (C.34.d.26). Together, these publications represent a significant addition to the Society’s list, but in the case of Doctor Faustus 1616 there is an added bonus. As Professor Hanabusa explains below, he has solved a mystery which has long perplexed scholars.

‘Of the two editions of Doctor Faustus, that of 1604 (the A-text) was printed by Valentine Simmes for Thomas Bushell, but the reprints of 1609 and 1611 were by George Eld for John Wright. The expanded version of the play printed in 1616 (the B-text) — and five subsequent printings between 1619 and 1631 — were also for Wright. However, no printer was named for the B-text. This is both perplexing and highly unusual, since the printers of all Marlowe’s other plays, and of all single Shakespearean quartos, were either specified on the title-page or are identifiable from printer’s devices, ornaments or initials. No such features appear in Q4, but one further clue is provided by damaged types. 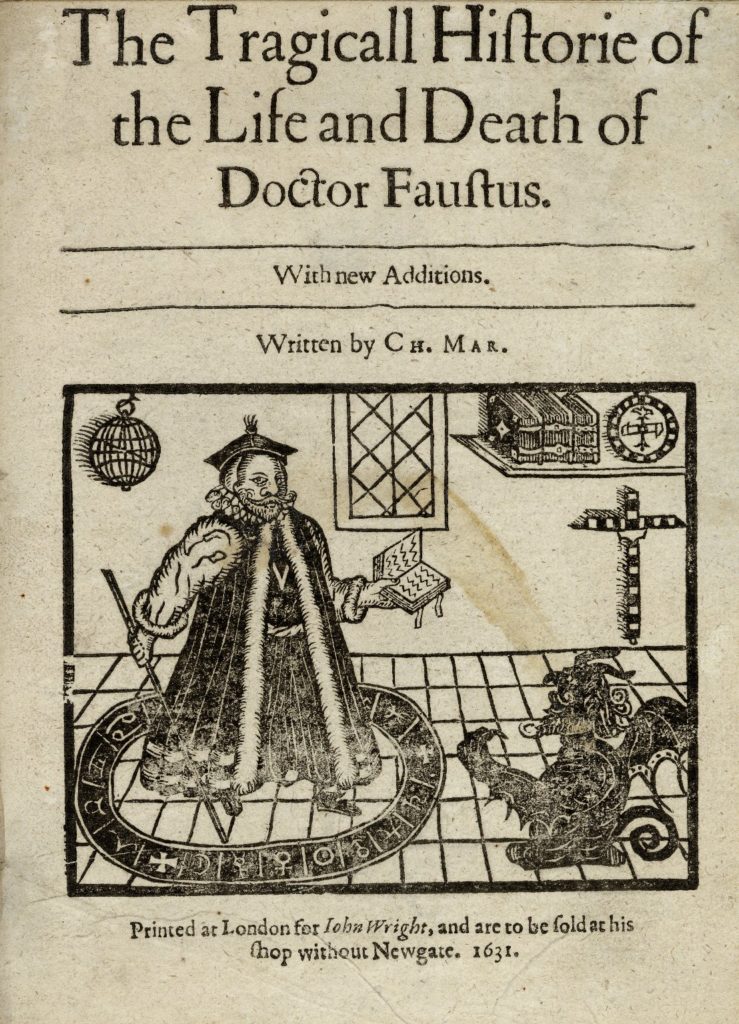 ‘To be conclusive, the evidence must show that distinctive letters — whether bent, cracked, or broken — occur unambiguously both in Q4 and in books dating from around 1616 whose printer is known. My search for such letters focussed on pica roman types, which are more fragile than black-letter types. An examination of all battered roman types yielded more than a dozen with evident flaws (both majuscule and minuscule), of which three found in Q4 seemed distinctive enough to identify the printer. They were two examples of upper-case “B” and “M”and one of lower-case “n”.

‘From my investigations of books in the British Library, it emerged that George Eld — the obvious leading candidate on account of his involvement in the printing history of the A-text and other productions for Wright — could not be the printer of Q4.  Fifteen books printed by Eld between 1615 and 1617 contained no examples of the control group sample damaged letters. A similar negative finding resulted from my examination of fifteen books printed by George Purslowe, who is thought to have printed three editions of Mucedorus (1626-1631) for Wright.

‘The third and final possibility was Nicholas Okes, but he initially seemed an outsider since he is known to have printed only four books for Wright. However, the three damaged letters were found in seven titles, of which Okes was named as the printer, between 1615 and 1618; these included Q4 The Honest Whore (1615) by Thomas Dekker, and Q2 The Insatiate Countess (1616) by John Marston, William Barksted and Lewis Machin. Exciting though this was, it could not be finally conclusive, because identical types on separate pages, in different books, or even in different copies of a single title, sometimes appeared dissimilar due to heavy or weak inking, or to unsteady pressure from the press. 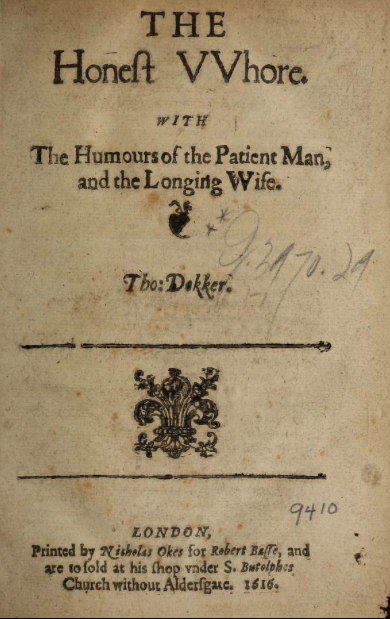 ‘I therefore continued my search in the Bodleian Library, Oxford, which houses further copies of Okes’s books. Half a dozen copies of titles already investigated at the British Library showed the damaged types, and one of the types was found in a further book printed by Okes which was not in the BL. Cambridge University Library and Meisei University Library contained further copies of books by Okes with the damaged types.

‘Okes specialised in topical ephemera — such as satirical pamphlets, jestbooks, epigrams — and expert opinion does not rate his standards as a printer very high. Moreover, he was several times fined for unlicensed printing or for printing books whose rights he did not own. Against this must be set his responsibility for more than seventy editions of contemporary plays, including such prestigious titles as the first editions of Shakespeare’s King Lear (1608) and Othello (1622), Webster’s The White Devil (1612), Ford’s ’Tis Pity She’s a Whore (1633) and the first and second quartos of Beaumont and Fletcher’s Philaster (1620, 1622). He also printed Shakespeare’s Lucrece (1607) and Jonson’s The Masque of Queens (1609). 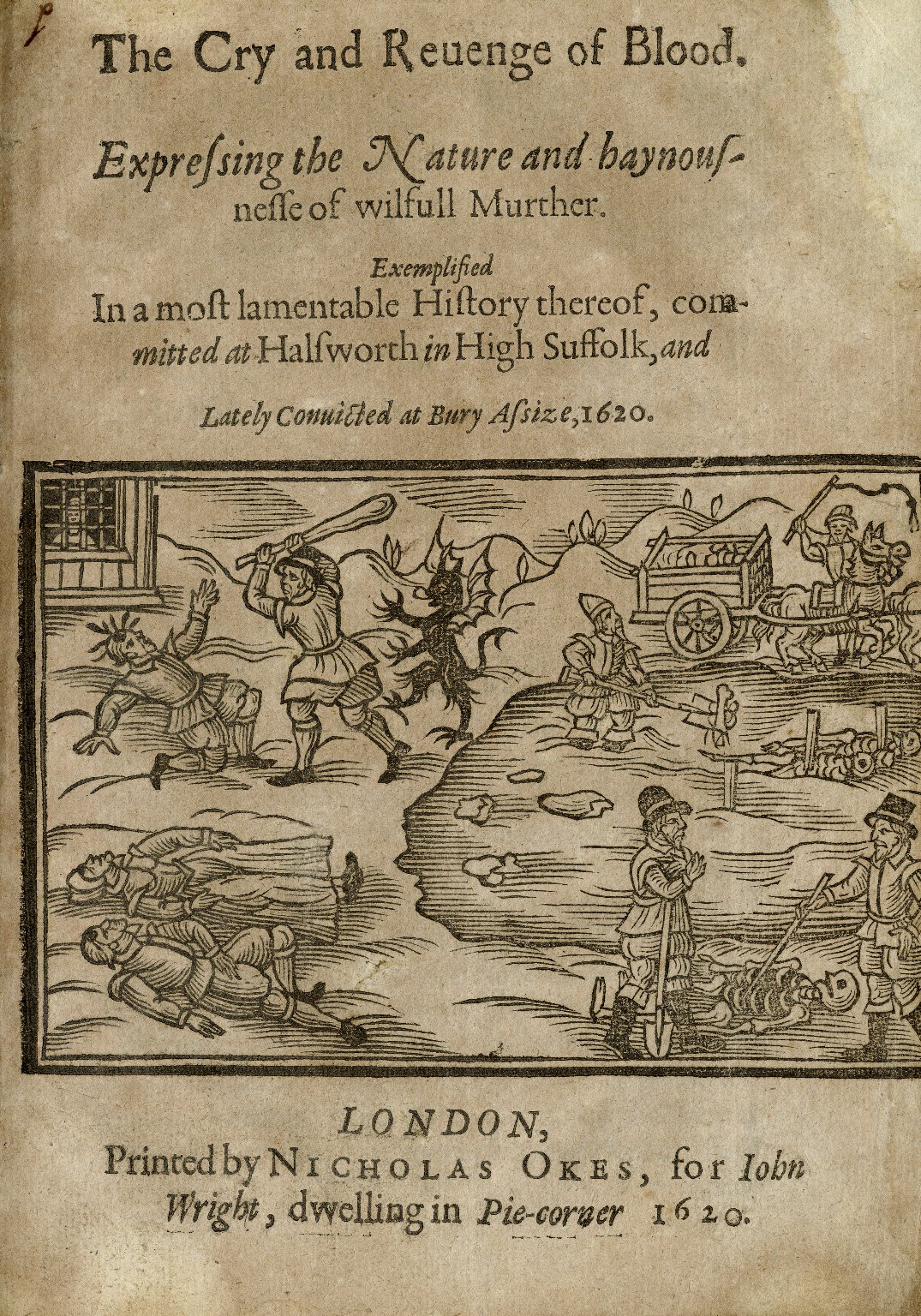 ‘As a result of my researches, I am confident that we can now add the 1616 edition of Doctor Faustus to the list of Okes’s printed books, and it is a source of particular pleasure to me that Professor Peter W. M. Blayney, author of The Texts of King Lear and their Origins: Volume I. Nicholas Okes and the First Quarto (1982) and the foremost authority on Okes, has checked and confirmed my identification.’

Professor Hanabusa’s edition contains much other illuminating information about the revision and casting of the B-text.  The two texts of Marlowe’s most original and influential play, now available in these high quality volumes, will be of the greatest interest to members of the Society, and an added inducement to those thinking of joining.  For details please see our membership pages.