This is the first of a series of guest blogs focusing on plays from our back catalogue. George a Greene, which appears to have been first performed by Sussex’s Men around 1587-92, was published by the Society in 1911, in a type facsimile of the 1599 quarto edition prepared by F. W. Clarke. It is explored here by Rebekah Owens, a doctoral student at the Shakespeare Institute, University of Birmingham.

George a Greene is available from our online bookshop until 30 June at the special offer price of £5 for members and £15 for non-members. Members should enter the code MALSOCMEM when asked for a coupon code in the shopping cart or checkout page to receive their discount. The play will be staged at Shakespeare’s Globe as part of its Read Not Dead series on Sunday 9 June.

George a Greene is probably best known among scholars for the title-page of the Devonshire copy, now held by the Folger Shakespeare Library in Washington, DC, and reproduced in the Malone Society edition. This is the page on which George Buc, Master of the Revels between 1610 and 1622, recorded the results of his enquiries as to the author of the play. According to his notes, Edward Juby, an actor, thought it might have been Robert Greene. William Shakespeare could not recall the name but told Buc that whoever wrote it was a minister who took the title role for himself. 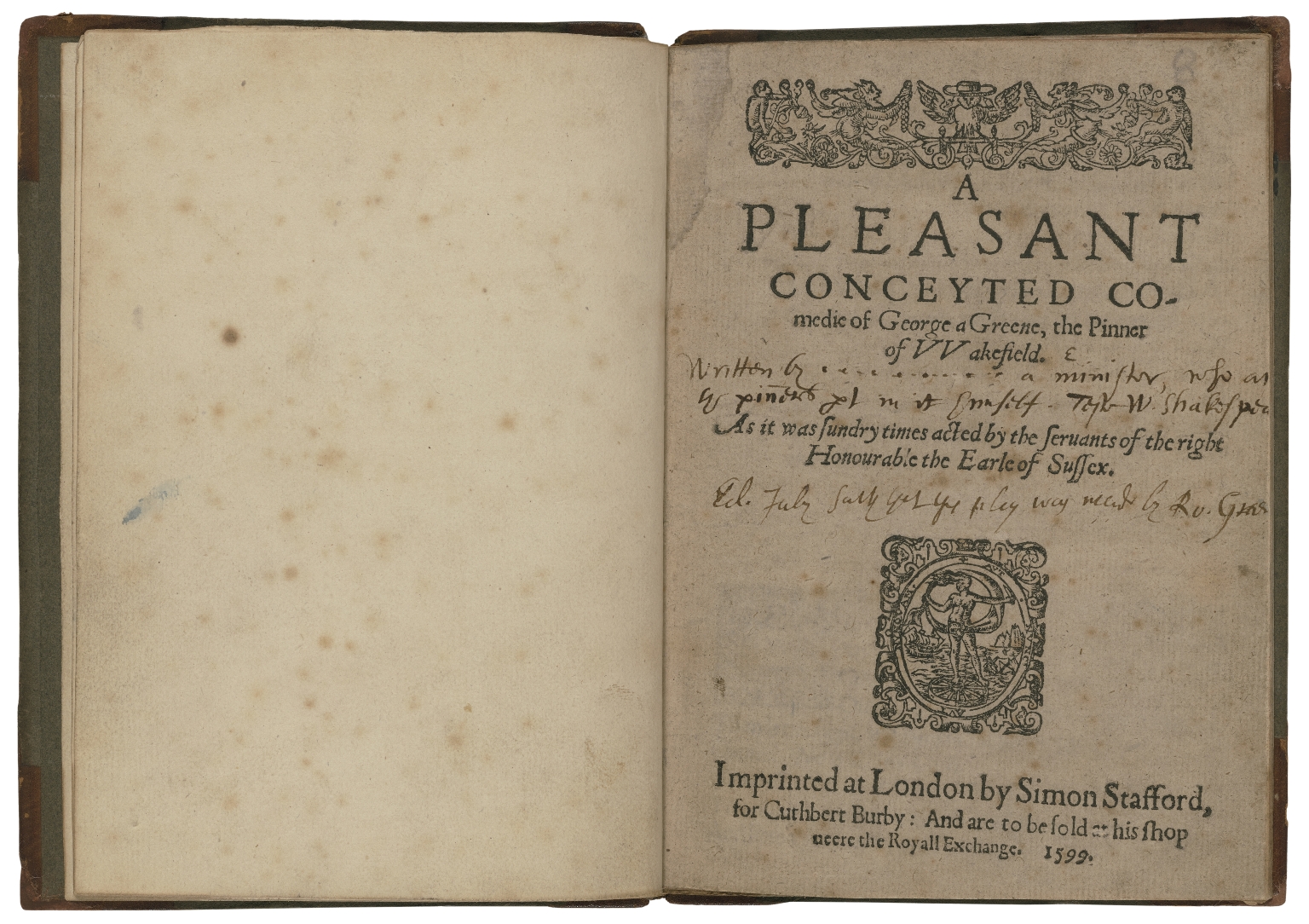 Whatever the job of its author, whether professional playwright or churchman, that same title page tells us the profession of someone else: its principal character, it states, is ‘the Pinner of Wakefield’. Historically, the job of the ‘pinner’ (or pindar) was to round up stray animals and pen them in an enclosure until the owners paid to have them returned. George is diligent in these duties. As he tells the Earl of Kendal and his followers when they let loose their horses, ‘I am the pinner, and before you passe / You shall make good the trespasse they haue done’ (vi. 499-500). The position also involved being watchman of the boundaries – hence George’s challenge to Robin Hood ‘and his traine’ who threaten to ‘Leape the ditch’ (xi.1054) that borders his territory: ‘you … may not wend this way’ (xi.1049).

George’s encounter with the noted outlaw has meant that his story has become a part of the Robin Hood canon. That is, it is now regarded as one of a number of stories in which a folk hero living in a forest with a devoted entourage challenges the status quo by attempting to redistribute the excess wealth of the few to the impoverished many by less than legal means. These are stories in which the needs of the ordinary citizen are recognised and celebrated above those whose position in life grants them a status they do not earn, nor necessarily deserve. And indeed, this is a play that celebrates the culture of the commoner, making much of the traditions of the North, such as trailing the staff (xiii.1117-23), and the innate nobility of those that pursue them, signified by the fact that the custom is given royal privilege (1339). Such privilege, too, is granted the shoemakers whose trade is formally recognised as ‘the gentle craft’ (1251) Much is made in this play of George’s own humble origins, and the seriousness with which he pursues his vocation – he refuses a knighthood from King Edward, preferring, as he says to ‘live and die a yeoman still’ (1314). His manners, his hospitality, the chasteness of his love, and his treatment of the wronged are all present and they contrast with the behaviour of the gentlemen proper, the rapacity of whose ambition leads them into some distinctly unrefined behaviour.

Look closely, however, and it is apparent that, as in many of the Elizabethan versions of the Robin Hood legend, all this loyalty to the life and culture of the ordinary citizen does not mean that anyone, including George, actually undermines authority. From the outset the pinner’s actions are prompted by his recognition of royal authority – ‘subiects all vnto the king’ is his resonant phrase – and he challenges anyone who defies that, saying, ‘we haue / Nothing left for traytours’ (ii.108, 114). And, as the action unfolds, it becomes apparent that his job as a pinner is analogous to his role in the wider political events of the play. Throughout, George conscientiously continues to do his job: he puts things back where they belong. He preserves the boundaries between England and Scotland and repatriates straying rebels to their rightful owners. He captures the Earl of Kendal and hands him over. When King James of Scotland is captured by old Musgrove and his son, George insists that, as payment, James should make reparations for the victims (xiii.1326-28). Such are his actions and his growing fame that George appropriates even from Robin Hood his reputation – ‘I heare no songs but all of George a Greene’ (x.930). And this is something that the great outlaw himself feels he has to reclaim, albeit at the insistence of Maid Marian.

Given how seriously George takes his job in the play, perhaps that is why Shakespeare could not recall the name of the author, but he did remember something about a minister – someone else whose job it was to act as watchman for a higher authority, to gather in any strays and insist they repent and pay for their transgressions.