This is the first of two blog posts from Maria Shmygol about her research into William Percy’s manuscript play The Aphrodysial, for which she received a Malone Society Fellowship. Part two can be found here.

Maria is based at the English department of the University of Liverpool, where she is assisting Nandini Das with her work editing Volume 6 of a fourteen-volume critical edition of Richard Hakluyt’s Principal Navigations, general edited by Daniel Carey and Claire Jowitt for Oxford University Press. She recently completed an AHRC-funded doctoral project entitled ‘“A Sea-Change”: Representations of the Marine in Jacobean Drama and Visual Culture’, research for which engaged with a range of commercial plays, civic entertainments, and court masques.

Maria’s current work—particularly her edition of William Percy’s The Aphrodysial, for which the Malone Society awarded her a Research Fellowship—develops her interests in textual editing and manuscript culture. Other research interests include cultures of knowledge in the early modern period and the relationship between natural history and print.

She was the co-organiser of a conference entitled ‘Making Knowledge in the Renaissance’ (Liverpool, March 2015) and is currently writing an article on theory and practice in the textual works and artisanal practice of the French Huguenot potter, Bernard de Palissy.

Part I: Working with the Play in MS HM4

I am currently editing William Percy’s manuscript play, The Aphrodysial (1602), which will be published by Digital Renaissance Editions. I’m very grateful to have received a Malone Society Fellowship, which helped to support me in carrying out a transcription of my copy-text at the Huntington Library earlier this year. This two-part blog entry will provide an introduction to Percy, his manuscript, and my work on it (Part I) and an overview of Percy’s remarkable play and its interests in staging marine spectacle (Part II).

William Percy, son to the Eighth Earl of Northumberland, was an amateur dramatist and poet who lived on the fringes of London and Oxford literary culture. His only published work is his Sonnets to the Fairest Coelia (1594) but his other poems and plays are extant only in three holographs: Alnwick Castle MSS 508 (1644) and 509 (1646), and Huntington Library MS HM4 (1647). While the plays were mostly composed in the first decade of the seventeenth century, the surviving manuscripts are later transcriptions carried out by Percy in the final years of his life while residing in Oxford. The majority of the plays were written between 1601 and 1603, as indicated by the dates borne by them in the manuscripts and through internal evidence, and Percy must have copied the surviving transcripts from earlier papers that are no longer extant.1

The Aphrodysial is extant in only two of these holograph copies: Alnwick 509 (1646) and HM4 (1647). As with the other plays in both manuscripts, The Aphrodysial is written in a legible, but shaky, italic and has been revised several times throughout. Working with Percy’s manuscript at the Huntington presented a number of interesting issues. I’m using the Huntington copy as the basis for my edition because it represents a more ‘final’ version of the play than does the ‘experimental’ text found in the slightly earlier manuscript. Nevertheless, as the images below make clear HM4 is riddled with copious emendations that take the form of deletions, insertions, marginal notes, and a plethora of pasted-on slips, which made transcription of the manuscript somewhat of a challenge. 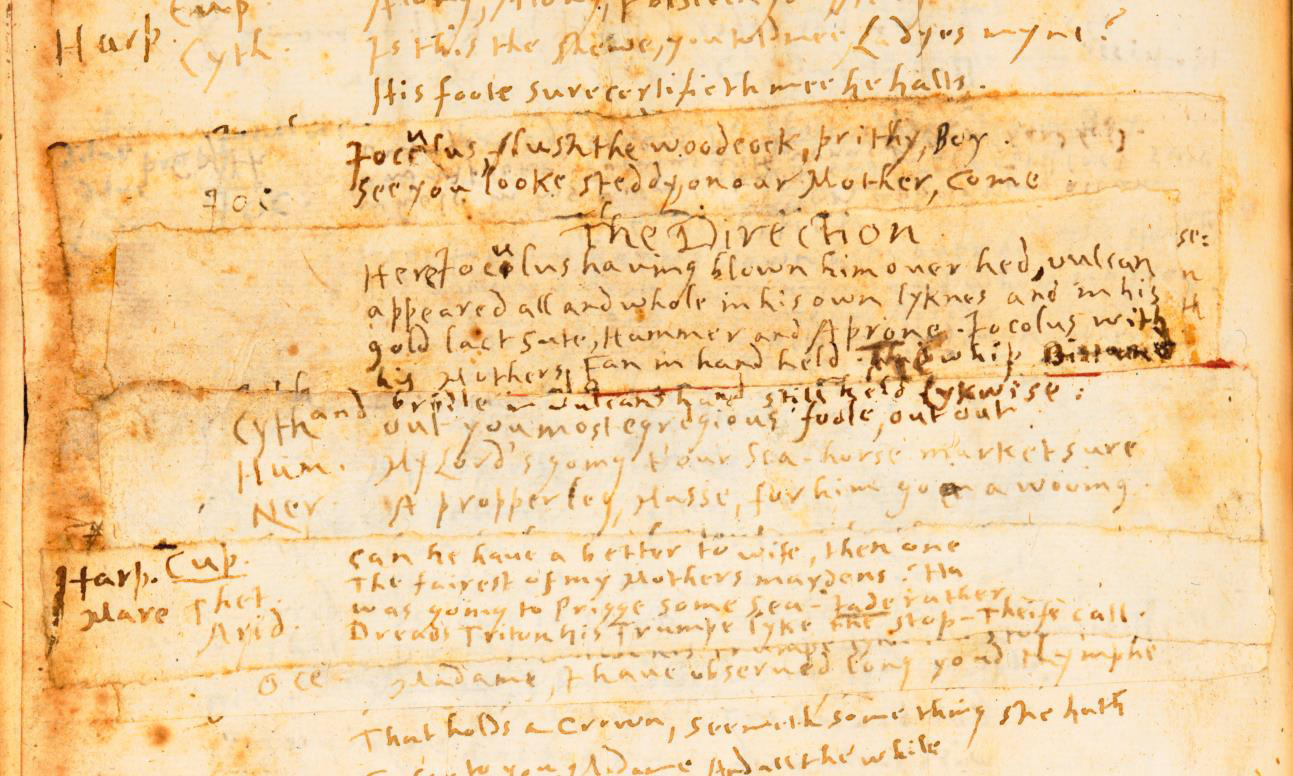 The peculiarities of Percy’s shaky italic hand initially took some getting used to (e.g. the difficulty of distinguishing between his e/t forms). What proved most challenging were the repeated instances of very cramped text, which typically took quite some times to make sense of. However, nothing proved more frustrating than the presence of the pasted-on slips, especially the instances where multiple slips are pasted on top of one another, given that it’s impossible to see exactly what is underneath them. Oddly, the frustrations of working with this manuscript seemed fitting for a rather eccentric play such as this. The material presence of the emendations offers a valuable insight into the frustration that Percy himself much have felt when revising his play and preparing the manuscript, arduously fussing over fine details and changing his mind back and forth between choices such as ‘bracelet’, ‘love-rolle’ and ‘ceston’, for example.

The manuscript bears witness to the ways in which Percy worked with and shaped his play, revising and perfecting both the dialogue and the stage directions throughout. It’s evident that thinking about the play in performance was very important for Percy, since he provides alternative directions for boy and adult actors’ companies, being careful enough to note that fake beards should be provided for the boys but not for the men, for instance.

The format of my edition for Digital Renaissance Editions will enable me to do justice to Percy’s play by making the surviving manuscript versions available alongside my edited text. The edition will include facsimile images of both MS copies and my transcriptions of them, together with a modern-spelling annotated edition (which will have interactive links for glosses and longer explanatory notes). The material will be electronically tagged, which will facilitate navigability between modern text, transcription, and facsimile at the click of a mouse. DRE’s open-access policy will make this fascinating and regrettably little- studied play freely and easily available to students and researchers alike. The edition will likewise invite more critical engagement with Percy’s drama, the likes of which I have been undertaking in recent years.2 It is my intention that the edition will encourage a further reassessment of the style and content of Percy’s play and its place in early modern literary studies.

2. I have carried out work on the play for the purposes of my doctoral thesis and have presented a seminar paper on ‘Dis-enchanting Marine Wonder in William Percy’s The Aphrodysial’ at the Shakespeare Association of America Annual Meeting (St. Louis, MO, April 2014) as well as a paper entitled ‘‘Such a fish as never was heard of’: A Whale for a Stage in William Percy’s The Aphrodysial’ at the Society for Renaissance Studies Conference (Southampton, July 2014).