It was with deep sadness that members of Council received the news, at their meeting on October 17th, of the death of Professor Thomas L. Berger the previous week.

Tom Berger became Malone Society Treasurer for the United States (a position he held for nearly thirty years) at a particularly turbulent period in the Society’s affairs. The chaos into which the Society had fallen in the early 1970s had been restored to a degree of order in America through the sterling work of Professor G. E. Bentley, but it fell to Tom, as his successor, to return the US sphere of the Society’s activities to their once-flourishing state. Characteristically, he brought not only considerable energy and enthusiasm to the task, but a whimsical humour designed to attract younger scholars to an organization associated with scholarship of the most exacting (and superficially uninviting) kind. It is to Tom that we owe the ‘Malone Ranger’ badges and Tee shirts (the latter recently revived), the ‘Malone Society Fun Run’, and a host of highly inventive conference stalls acquainting the uninitiated with the joys of belonging to a quirky, dynamic and highly idiosyncratic organization. For those of us who worked with him he was a tower of strength on a range of fronts – ready to conjure up money when needed, to offer advice as we confronted a host of problems arising from the Society’s near-demise, and to bring his own scholarly expertise into play in the editing of three of our publications (and making a signal contribution to a fourth). He was a relaxed presence at Council meetings on his visits to England, a witty and charming correspondent, and a firm believer in the value of the Society’s work. We shall miss him very much. 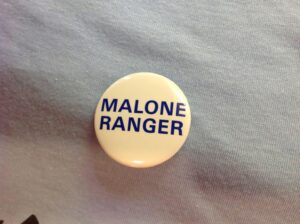